Arrest, Detention, Torture, Starvation, Rape… when you are a Palestinian Girl in Syria

(translated by Ruth Riegler) An eighteen-year-old Palestinian girl named ‘Huda’ has detailed her horrific experiences in Syrian regime prisons, ranging from beatings and torture with electric shocks to multiple rapes.

Huda, from Yarmouk Palestinian refugee camp in Damascus, who wished to withhold her real name for understandable reasons (fearing further persecution by the regime) was arrested by members of the pro-regime ‘Popular Front for the Liberation of Palestine – General Command’ (PFLP-GC) at the camp entrance in early 2013 when she was 16 years old on charges of “terrorism”.

She said that she and three other Palestinian women from Yarmouk camp were tortured by the PFLP-GC personnel prior to being delivered to the Assad regime’s infamous ‘Palestine – 235’ branch in Damascus, where she was imprisoned for the next four months.

She recalled being subjected to all forms of torture by the regime’s security agents whenever they took her out of the cell there measuring roughly 3 x 4 meters, where she was kept with eighteen other women, mostly also Palestinians. The regime’s torturers began with torture by electrocution, she said, followed by beatings with whips and rods. After this she was transferred to ‘Branch 215’ also in Damascus, where she said the torture is “exponentially” worse than that she’d suffered at the Palestine Branch.

At Branch 2015, she recalled, “the investigators were interrogating young girls and young men from Yarmouk refugee camp, demanding names [of anyone opposing the regime]. When we denied knowing them, we’d be beaten, tortured, starved, electrocuted. I was raped during my stay there for more than 15 days. Sometimes I was raped repeatedly more than a dozen times a day by different officers and prison warders.”

Huda found out that she had been impregnated during one of the rapes when she miscarried a baby as a result of one of the daily beatings administered as standard, which she said resulted in “my being injured and bleeding heavily, losing consciousness. They threw me into a cell filled with the bodies of detainees killed under torture, where I was forced to stay, surrounded by those bodies and blood for approximately three weeks. Then I found out I was pregnant when I miscarried as a result of the beatings.”

Rape of the female detainees is commonplace, she explained, adding, “One of them tried to commit suicide by battering her head off the walls of the cell. Each time she’d lose consciousness for a few hours.”

Huda recalled one case she witnessed when a 20-year-old Palestinian girl in the same cell gave birth to a baby boy conceived when she was repeatedly raped by the regime guards. “After the birth, she couldn’t bear to look at the baby or keep it next to her in the cell and wasn’t able to endure the sound of his crying. She just wanted to get rid of him, to kill him when we weren’t looking because his existence was a reminder to her of being raped by the officers.” Huda added, “A few days later a guard entered and took the baby away – they knew that his presence in the cell was proof of the torture that created him.”….

You can read the entire article using the source link:

Source : Arrest, Detention, Torture, Starvation, Rape… when you are a Palestinian Girl in Syria 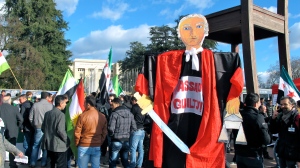